It has ten provinces and three territories, but despite its vast size it is one of the world’s most sparsely populated countries, with most of the population of 37 million living in urban areas and – due to the low temperatures in the winter – within 300 km of the US border.

Running north-south in the west of the country are the mountainous Rockies, with heights up to 6,000 m. To the west of these mountains is temperate rainforest bordering the Pacific Ocean, including numerous forested islands and Canada’s third-largest city, Vancouver, in the province of British Columbia.

East of the Rockies are the provinces of Alberta, Saskatchewan and Manitoba – the Great Plains – relatively flat grassland used extensively for arable farming, with boreal forest to the north. Further to the east lies Ontario with Canada’s largest city, Toronto, and capital city, Ottawa, on the border with the French-speaking province of Québec. Here is Canada’s second-largest city, Montréal, and further east are the Atlantic provinces of New Brunswick, Prince Edward Island, Nova Scotia and Newfoundland and Labrador.

To the north of these ten provinces are the territories of Yukon and North West Territories and the newest territory of Nunavut bordering the Arctic Ocean, which is mostly tundra and ice, and to its north, the large islands of the Arctic Ocean. 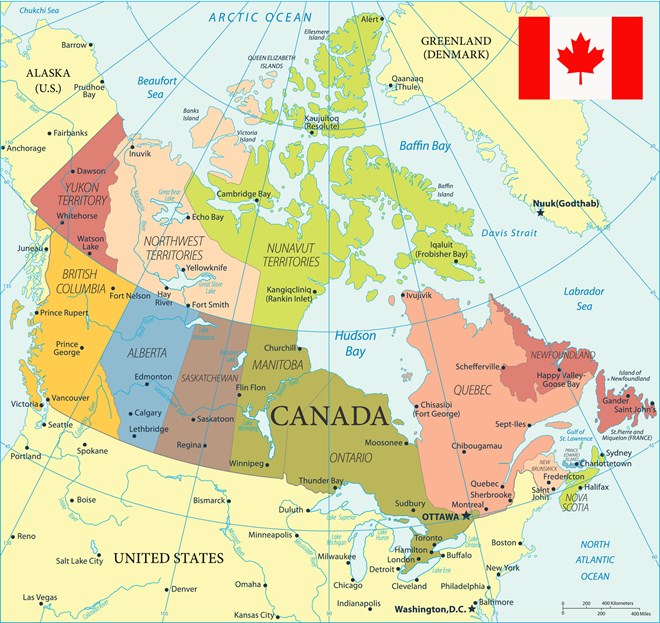 Canada is the world’s second-largest country and eleventh-largest economy, with a population of 37 million people.

There are extensive historical ties between the UK and Canada, and English is one of Canada’s two official languages. With the exception of Québec province, it has a legal system based on that of the UK’s, strong Intellectual Property rights protection, little tolerance for corruption and a high degree of transparency enhancing government integrity. The Heritage Foundation’s 2019 index ranks Canada’s economy as the eighth-freest in the world and first among the 32 countries in the Americas region, with an overall score well above both regional and world averages.

In addition to providing the benefit of stable rule of law and a large developed market, Canada is also a good starting point for entering the North American market, as well as the wider Americas. Canada has a free trade agreement (FTA) with the United States and Mexico through the North American Free Trade Agreement (NAFTA), the new Canada-United States-Mexico Agreement (CUSMA) awaiting ratification, and also trade agreements with Panama, Costa Rica, Chile, Peru, Columbia and Honduras.

The EU-Canada Comprehensive Economic and Trade Agreement (CETA) came into force in 2017, and – while the UK is still in the EU – helps strengthen trade between Canada and the UK by eliminating virtually all Canadian import duties, ending customs tariffs on 98% of goods, eliminating over 90% of tariffs on agricultural products and creating more opportunities for UK companies to bid for Canadian public contracts at all levels of government.

On wider bilateral relations, the UK and Canada have a strong relationship that extends to many of the world’s most important international institutions, sharing membership of the Commonwealth, G20, G7, the World Trade Organization and NATO, among others.

With a business-friendly environment built on world-class cities that consistently rank as the best places to live, work and play, and with the fastest growing economy in the G7, Canada’s sophisticated market provides strong commercial opportunities for British businesses across all sectors.

History and geography have been key ingredients in what has allowed Canada to thrive and become one of the most stable democratic entities in the world today. According to the Economist Intelligence Unit’s Democracy Index, Canada is consistently ranked amongst the top ten countries in terms of its political culture, its extensive provision of civil liberties and its advocacy of political pluralism.

Due to its size, and the historical and cultural demands this places upon national unity, Canada has developed a hybrid political structure – combining Westminster-styled parliamentary democracy with a federal system of governance. Powers are therefore dispersed between three separate levels of government: the federal government, based in Ottawa, comprising of the elected House of Commons alongside an appointed Senate; provincial/territorial government and the municipal (city-level) government.

The federal government, led by the Prime Minister based in Ottawa, is responsible for administering policy for national and international matters. These responsibilities include setting regulations on customs tariffs, banking, Intellectual Property, transportation and providing national defence, whereas provincial and territorial governments primarily hold powers to adapt or change laws involving the use of public lands (natural resources) and they administer the provision of healthcare and education, whilst the municipal government provides more localised governance to cities, towns and districts. More information detailing the division of powers can be found on the Government of Canada website: https://www.canada.ca/en/immigration-refugees-citizenship/services/new-immigrants/learn-about-canada/governement.html.

It is important to note that companies seeking commercial opportunities in the infrastructure development sector or in the extractive resources sector must comply with, or work alongside, local and provincial levels of government. This is vital when considering the wider impact of these sectors upon Indigenous communities, First Nation People(s) and where business practices may have an impact upon their lands.

Where this occurs, businesses are also encouraged to consult federal, provincial and municipal regulations, licencing laws and the permit requirements detailed on the Government of Canada website at: https://canadabusiness.ca/government/permits-and-licences/.

Canada is renowned for its status as a world-leader in the promotion of human rights abroad and for its domestic record on rights provisions established under its multicultural constitution. Multiculturalism has become a defining component of Canada’s modern identity and is promoted through the 1988 Canadian Multiculturalism Act. Business culture in Canada therefore reflects an emphasis upon pluralism, diversity and understanding – businesses are expected to owe a duty to ‘accommodate’ the needs and requirements of its workforce.

In terms of employment laws, Canadian legislation provides a wide range of rights and working standards for employees. Like the UK, laws exist which establish working times, wages, holiday allowances, public holidays, parental leave, severance pay, dismissal and hiring practices. However, the terms and extent of these provisions vary depending upon provincial and territorial laws. Minimum wages and public holidays will be areas where this variation is most evident.

Further information outlining the labour rights of workers in the federally-regulated sector as well a list of Provincial and Territorial Ministries of Labour are available on the ‘Employment and Social Development’ section of the Government of Canada website at: https://www.canada.ca/en/
employment-social-development/programs/employment-equity/regulated-industries.html#provlist.

English and French are the official languages of Canada, with French being the most prominently spoken language in the province of Québec. Due to the need to facilitate the rights of French speakers, the Charte de la langue française (The Charter of the French Language, or Bill 101) establishes French as the recognised language of business in Québec – established within provincial-level legislation.

Businesses seeking to operate within Québec therefore must ensure that appropriate accommodations and protections for French-speaking workers are met alongside English and minority-spoken languages of Indigenous people(s). Details of these requirements upon businesses are available on the Gouvernement du Québec’s website:  http://www.legisquebec.gouv.qc.ca/en/showdoc/cs/C-11.

The Canadian economy is performing well, with robust growth. The monetary policy stance has been broadly appropriate and inflation is well contained. The housing market is finally showing signs of cooling down, although there are concerns due to trade tensions, uncertainty about the NAFTA and CUSMA as well as the impact of the US Tax Cuts and Jobs Act on Canada’s medium-term competitiveness.

An escalation in trade tensions between the US and its major trading partners could disrupt global supply chains, although positive momentum in the Canadian economy is expected to continue in the short-term, with real GDP moderating to a more sustainable 2% growth. A growing US economy will provide a boost to Canadian exports and is expected to contribute to a narrowing of the current account deficit.

See the IMF Country Report No.18/221 at: https://www.imf.org/en/Publications/CR/Issues/2018/07/16/Canada-2018-Article-IV-Consultation-Press-Release-Staff-Report-and-Statement-by-the-46084 for further information.

With a shared history, political system and language, many historic ties and affinities exist between Canada and the UK, and Canada is a welcoming environment for UK businesses, with mutually beneficial co-operation in a wide range of areas.

The UK exported £10 billion of goods and services to Canada in 2017, making it the UK’s eighth biggest export market outside the EU, and the UK is Canada’s seventh largest source of goods imports and second largest services trading partner.

There are a number of reasons to choose Canada as an export destination:

CETA entered into force in September 2017 and is one of the most extensive EU free trade agreements (FTAs) to date. While the UK remains in the EU this benefits UK companies by removing 98% of the duties they have to pay at Canadian customs, and helps strengthen trade between Canada and the UK.

Visit the Official Journal of the European Union site at: https://eur-lex.europa.eu/legal-content/EN/TXT/HTML/?uri=OJ:L:2017:011:FULL&from=EN for the full text of the CETA.

For general information about the CETA see: https://www.gov.uk/government/publications/eu-canada-comprehensive-economic-and-trade-agreement-guidance-for-uk-exporters from the UK Government, and: http://ec.europa.eu/trade/policy/in-focus/ceta/ from the European Commission, and: http://rtais.wto.org/UI/PublicMaintainRTAHome.aspx from the World Trade Organization (WTO).

Contact a DIT Export Adviser at: https://www.great.gov.uk/contact/triage/location/ for a free consultation if you are interested in exporting to Canada.